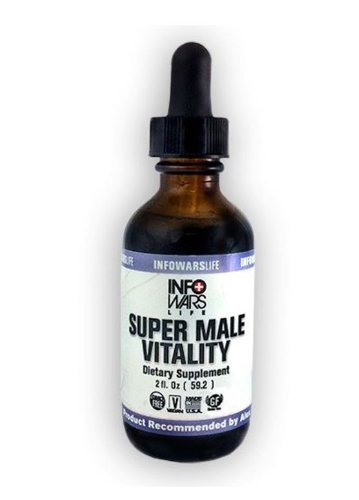 Super Male Vitality Review – Are Missing Results Worth The Price?

Super Male Vitality is a liquid based testosterone booster. Dr. Edward Group of the Global Healing Center spend over five years developing Super Male Vitality. It is marketed as a vitality booster that’ll balance male hormones, and with all non-synthetic natural (non-GMO) herbs and roots.

Super Male Vitality is sold on the store section of the popular conspiracy theory website Infowars, along with survival kits and radiological replacement filters. This might put some buyers off, or possibly intrigue them further, but let’s get down to what the product actually offers before we cast judgment. That said, $50 to $70 for a bottle of this stuff that’ll last you about 3-4 weeks.

What are customers saying?

Super Male Vitality (click to see options on Amazon) has hit the market with some interesting reviews (that doesn’t necessarily mean they’re all good), as well as a surprising recommendation and distribution deal by Infowars super-conspiracy theorist Alex Jones.

It seems like people either love it or hate it. Some say it increases libido, but few have verified any increase in actual testosterone levels. The word “scam” has been thrown around quite a bit in forums and reviews.

Customers on Amazon were all over the map on their reviews.

“This supplement is a scam.” – Amazon Customer

“I have been taking it for about two weeks now not quite feeling any different!” – PP

“I didn’t really feel anything different except $60 lighter in my wallet. Honestly I don’t think I’ll purchase it again.” – Tom Kopf

“After 4 weeks the only effect I noticed was insomnia, which led to fatigue and irritability during the day. Absolutely no positive effects whatsoever. Waste of money.” – MarkT

“On my 3rd bottle. I swear it works. My wife asks where all this energy is coming from!” – Ruger

“So far another absolute BS supplement or miracle herb and another set of BS reviews which is ruining Amazon review system. I found this so far to be absolutely no miracle vitality, no benefit whatsoever.” – Amazon Customer

The ingredients are listed under a proprietary blend, and don’t include dosages, making it hard to figure out where you’re getting most of the benefits some customers have proclaimed. Ingredients include Tribulus Terrestris, which has shown very questionable results in laboratory tests. It has been used in many testosterone boosters on the market, but we’re not convinced.

Comments by the ladies on Amazon:

“Male companion took for full month daily & stated he felt no difference in energy, concentration, just nothing noticeable. Perhaps if you take this for several months to achieve results, I don’t know.” – daysjunkie76

“My husband took it faithfully. He’s in good shape. Doesn’t smoke or drink or eat badly. Saw no performance difference. Money down the toilet.” – Amazon Customer

“I ordered this for my husband and it was amazing how well it works! I noticed the second day of him taking it that he had way more energy than normal . My husband has always worked out but he had been in a slump the last couple months after one day of taking super male he was back to his workout routine. There were improvements in every area that were noticeable his mood is better and he is more affectionate it’s like when we first meet 15 years old again!!! This is by far the most amazing supplement he has tried to date I highly recommend super male vitality to everyone!!!” – vernicek

Sounds like the reviews from women are a bit better than a lot of the men’s.

So what’s the verdict?

We’ve given it 2 stars. The blend is most likely to be under-dosed. Our trainer Travis claims that it’s not likely to be as strong as the better products on our top list of testosterone supplements.

The product is also somewhat on the expensive side, compared to others on our list, and could be perceived to have some low quality controls. There is probably a better male supplement out on the market, and we have a few ideas about that product.

Extenze Plus Review and Results (2018 Update)