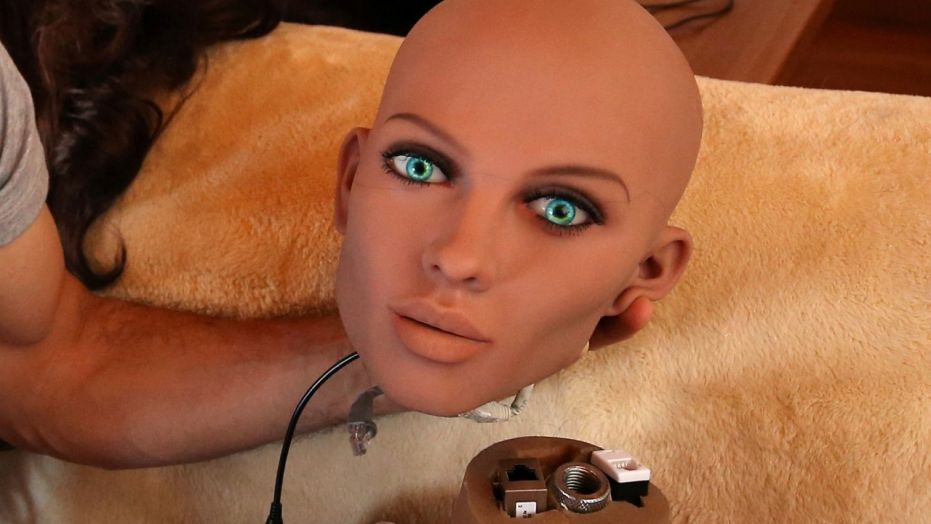 Uses and Abuses of Sexbots in the Near Future:

Movies and TV shows have a long history of portraying female robots as potential sex partners, and it’s easy to see why. It’s a fairly common male fantasy to have a woman who obeys a man’s every sexual whim. Since real women aren’t typically that accommodating, sexbots are the next best thing. At least that’s according to visionaries like Matt McMullen, who is the CEO of company that produces eerily realistic and customizable sex dolls. Now McMullen’s company RealDolls is busy at work developing an animated doll that can interact with people—and perhaps even seduce them.

Sex dolls aren’t exactly new. The inflatable versions have been around since the 1970s, and they’ve been regarded as curiosities for the most part. But some dolls are shockingly realistic, and RealDolls have been making them since 1996.

These dolls can look like actual women, and if you’re a customer then you can dictate exactly how they look. You can ask for a slim version or you can go for one that’s more voluptuous. You can dictate the color of the hair, as well as its length. The same goes for the color of its skin and eyes. The level of customization can be so finicky that one customer asked for specially designed and tailored toes.

These are still dolls, though they command top prices. You probably won’t find any of them at less than $5,000 and some models even approach the $10,000 mark. But as dolls, they generally just sit there unless you play with them like dolls and move them around.

Now there’s a new generation of sex dolls that are coming your way, and they’re not just lifelike when it comes to their looks. Eventually, these dolls can engage with you in more realistic manners. It starts by being able to talk with you so that they can murmur seductive phrases and engage in conversation. Then perhaps they may even walk around.

To achieve this, RealDolls have partnered with engineers with prior experience with companies like Hanson Robotics and other outfits that have already made amazingly humanlike robots. It’s just that this time these robots will be used mainly for sex.

In October of 2017, McMullen was already able to unveil a sexbot named Harmony. For Harmony, customers were able to choose from up to 16 different body types and 30 different faces. Breasts can be customized and can go from AA to a prodigious triple F pair. You can also pick among 19 different types of nipples, which can be “puffy” or “perky”. Even the genitals have options, and here you have up to 11 choices.

What really sets this sexbot apart is that it has a personality. In fact, it may be quite easy to refer to Harmony as a “she” instead of an “it”. She can be quite happy, or very sensual. She can be a chatterbox, or she may even be a shy type kind of gal.

AI has come a long way and now they can be used for more than just video games and chess. Harmony works via an app and you can help construct her personality. She can learn as well so that she will remember not just your name but the names of your family members and your favorite books, movies, and food. She can greet you with relaxing phrases like “Welcome home, how was your day, dear?” and she can even tell jokes.

Eventually, these dolls may even start moving. McMullen plans on putting in robotic arms and hands, along with heat sensors. They will seem more human as more time passes.

It’s true that talking sexbots who can offer sex on demand as well as clean the house and make you a sandwich is still many years away (and probably several million dollars too expensive). But Harmony isn’t a coming thing—she’s here. Her prices range from about $10,500 to more than $14,100.

It’s easy enough to get confused about the humanity of these constructs, should they ever become realistic enough that it’s impossible to tell them from humans. That’s certainly the end goal as shown in such TV fare as Westworld and Humans. Even the android Data was given a sentient status in Star Trek, though that status has been repeatedly challenged.

We’re still far enough away from such quality, and so the first challenge is to make these robots engage in a more human-like manner. A more convincing AI will be necessary, and “she” must be able to speak naturally instead of like a stereotypical robot. The mouth should be able to open or close. The eyes should occasionally blink.

Some researchers contend that as robots become more like humans, people may be revolted by them instead of being attracted to them. This is a concept first suggested in 1970, which basically states that people will regard these robots as creepy if they look alive, but they’re not convincingly human.

It’s for that reason McMullen and his team still make sure that their products still look like dolls. Yes, they’re good-looking dolls to be sure, but you know enough that they’re not human. There’s no sense of wrongness to experience if you don’t expect your doll to act truly human in the first place.

In these days of increased scrutiny regarding chauvinism and various forms of sexual assault, many feminists complain that these can contribute to the sexual objectification of real women. After all, these dolls and robots are becoming extremely lifelike, so it’s not farfetched to imagine men transferring their bossy attitudes towards real women.

In addition, quite a few find it controversial that robots with “shy” personalities can be “forced” to have sex. For some, it’s as if the doll is enabling rapists to have their way even if no actual human female is hurt. Still, the very idea of this is troubling for some people.

Harmony is the first of her kind to become commercially available, and it says a lot about society (and men in particular) that her main mission is to have sex with their owners. But according to McMullen, it’s not really about sex either. It’s about human companionship, and how many people feel isolated. Now with Harmony, you now can have a companion at home other than your pet pooch.