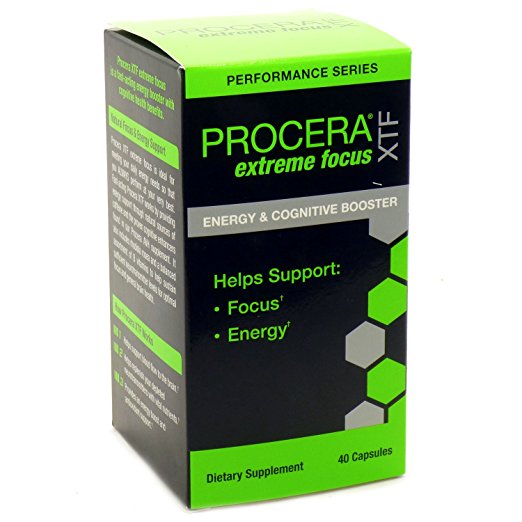 Procera XTF Buying Guide: How Can It Be Extreme If It’s So Mild?

When you think about taking a supplement to get “Extreme Focus”, you may think back on movies and TV shows like Limitless, which lets you do extremely difficult mental tasks with ridiculous ease. But this Procera XTF Extreme Focus may be a bit of a disappointment for you.

It’s true that Procera did well selling its AVH brain supplement to older adults. Now they’re targeting younger adults, and they don’t seem exactly sure on how to go about it. They say one thing, but do another. So let’s cut through this confusing situation, shall we?

What is Procera XTF?

When Procera first came to prominence, they did so with their AVH supplement. Their formula used Acetyl-L-Carnitine HCl, Vinpocetine, and Huperzine-A. Procera just took the initials for the AVH name for the stack.

Now they call their new formula XTF, which stands for extreme focus. The advertising says that it uses natural sources of caffeine, such as guarana. This is good if you’re ready for lots of caffeine, as guarana contains double the caffeine you find in coffee beans. But then again XTF doesn’t use much of it, so it’s not really extreme at all. Is it extreme when your caffeine does is just 40 mg? Seriously, that’s not enough.

You’re supposed to take 2 capsules per day, but the box comes with just 40 capsules. So a single container isn’t enough for an entire month (if the math is too difficult for you, then no supplement on Earth can help you, sorry). But some say they may get the effect they want when they take 4 capsules a day, which makes the box good for just 10 days. That makes it a rather expensive proposition.

Reviews – do they regret buying Procera?

On Amazon, there are only a handful of reviews so far, and the assessments are all over the place.

On other reviews online, many have noted that it’s not really extreme at all.

“I may have mentioned that Procera XTF Extreme Focus just isn’t that extreme!” – Nootropicgeek.com review.

Now you can go to the official Procera website and read the reviews, and surprise—everyone’s raving about it! Out of 24 reviews, 22 gave it a perfect score while the other 2 gave it 4 stars. Now it’s up to you whether or not you believe that this is an objective sample.

On Amazon, there are just too few reviews to get an accurate sense of its real effectiveness.

However, on other sites, reviews did emphasize that despite the “extreme focus” marketing, there’s nothing extreme about Procera XTF at all. It adds caffeine to the AVH formula, but then it cuts the nootropic AVH levels in half.

Also, you may want to know about how the company (then called Brain Research Labs at the time), was targeted by a deceptive advertising class-action suit after the manufacturer claimed that its AVH formula could restore up to 10 to 15 years of memory loss. They settled and paid $400,000 to the litigants and paid a fine of $1 million to the FTC.

When it comes to safety, you try to get a fair large sample of users to see trends. Coffee is a hugely popular drink all over the world, and it’s safe to say that it’s safe. A lot of people drink it, and you don’t see huge numbers of illnesses caused by the beverage.

In comparison, the use of guarana is just too uncommon. It’s fairly new and not that many people take it. It’s unlike coffee where billions of people have consumed it through the centuries.

Also, you have to keep in mind that the NCAA specifically names guarana as a banned substance.

Where Can You Buy Procera XTF? Are Sales Discounts worth it?

You can also try buying on Amazon, where cost is about average… Here the shipping is free if you buy at least 2 bottles. On Amazon, you can also set it up as a promotional giveaway if you’re a seller.

Despite the unfortunate bad press brought on by the lawsuit, there was no denying the popularity of the original AVH formula. The advertising may have been too hyperbolic and exaggerated, but the AVH formula did work well as a nootropic supplement.

So what did Procera do? They came up with the Extreme Focus formula, except that now the AVH level has been cut in half. How does that make sense?

Then they say that it’s an alternative to the jitters you get from other energy drinks, but they use caffeine to do it. They use guarana, but then they also keep the dosage low. So it’s not extreme at all. Your best bet is to just ignore this mess and buy something else!

Neuro Clarity Buying Guide- Are Results Worth The Higher Price?