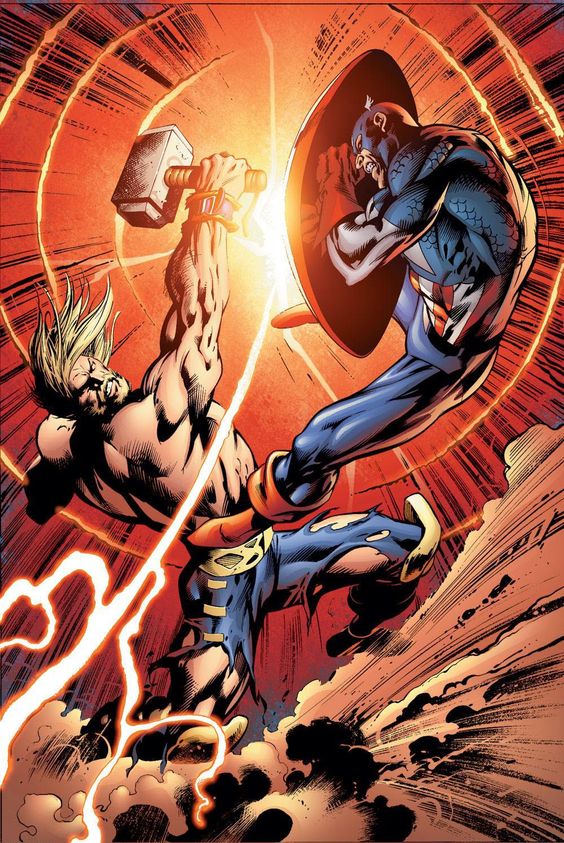 Prime Male and Testogen are like the Avengers for us, “Earth’s Mightiest heroes” – 2 of our best formulas in 2017. We’re nerds like that : )

To us, they’ve been creaming the competition. But there are a few people who wonder what would happen if Prime Male “Thor” fought “Captain” Testogen…

So we just had to create this comparison review… Here we go:
*Ding Ding Ding* Round One…

Prime Male seems to have slightly more ingredients: like 12 to Testogen’s 10. But the question as always, is about quality. Do the formulas seem well put together? Do they combine well?

We’ll get more into strength of dosages later, but note that Testogen tends to have strong dosages of separate ingredients, like ginseng and Tribulus. Prime Male’s stacks are both well thought out, as well as big and strong (Vitamin D and Zinc especially).

Testogen shows some evidence of quality thinking, with quality versions of ginseng, zinc gluconate and selenium…

But practically everything in Prime Male is quality or well planned, from the big combinations we mentioned, as well as evidence of the best quality versions of other ingredients for almost every single ingredient: like DAA-CC instead of normal DAA (and high quality magnesium and zinc citrate, AND chelated boron)… and transparent dosages that show concentrations of extracts (nettle root, mucuna). Bioperine even enhances the whole lot.

Some ingredients in Testogen seem big or generous, but are better as support –Tribulus is decent for health and libido, but unreliable for testosterone. Vitamin B is good for health support, but has less direct results on T levels themselves.  So we would rather have seen more of other ingredients in Testogen such as Boron, more zinc, and Vitamin D.

So for Round 1 and “Quality formulas”: we score this as a win for Prime Male. Thor calls a lightning storm from all directions- Cap is singed as he tries to dodge!

Testogen has generally sufficient dosages for all ingredients, and a few ingredients in big and generous doses. We especially love the large dose of true/panax ginseng, which helps pretty much everything: from Testosterone to libido, to energy to mental alertness.

In contrast, almost everything in Prime Male is strong and efficient, with multiple power punches that are also accurate: From Vitamin D to Zinc, to the ZMA stack, to the DAA-CC. DAA-CC is much better than normal DAA – 70 times more absorbable – and from experience we estimate the strength of 1600 mg is more than that of 3000mg normal DAA.

For Round 2: The Prince of Asgard swings a double hammer fist punch, which rings Cap’s shield like a bell – but the Super-solider still stands, shaken but still fighting … We score round 2 as a small win for Prime Male.

All that Prime muscle doesn’t come cheap – its $69 per bottle or a month’s supply of Prime Male. If you buy 3 you get a month free, which comes to about $52 /bottle.

But this just can’t compare to Testogen’s value for money. If you buy a single bottle on the Bauer site, its about $49 /bottle, and the various deals like buy 3 get 3 free can mean that 1 bottle costs less than $30 – especially if there are extra seasonal offers (the New Year 2017 discount was an extra 20% off).

For Round 3: It’s a clear victory for Testogen. The super-soldier has experience in all kinds of warfare, and the God-Prince gets a savage kick to the balls-sack. Even a god will falter  : )

Round 4: Track Record and Results

Both products are made in FDA approved facilities and with various medical records. But Prime Male has been around for a few years longer, and has an amazing track record, with dozens of testimonials, some by celebrity athletes.

Many include specific results, and fairly high profile personalities have been willing to publicly support Prime Male.

So we have to give Round 4 to Prime Male. The Thunder God unleashes his hammer – and the earth quakes for a mile around. The body of the Captain is sent flying through the air, stunned.

Here is a brutal fan-created video of Thor vs Cap:

Testogen is a versatile hero; he wins in pricing, and is no slouch for quality. But in a straight fight, the Super Soldier cannot hold against the God of Thunder.

We think the products speak for themselves: if you are on a tight budget, get Testogen.

But if you want to try the best, you should get Prime Male.