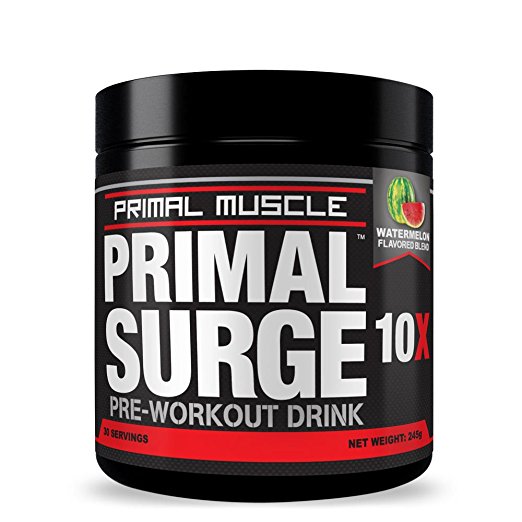 Some preworkout supplements are basically stimulants that give you lots of energy for your strenuous exercises. Others try to enhance your strength and endurance, so you can run longer and faster, or you can lift heavier weights with more reps. There are those that even also help with both muscle growth and weight loss. Then there’s Primal Surge, which claim that it can actually do all these things!

Seriously? Let’s take a closer look beneath the hype so that we can get a more accurate assessment, shall we?

Primal Surge is an energy drink that you take before you exercise so that you can really exert greater efforts for your workouts and you can maximize the workout benefits.

It’s in powdered form, and you mix it with water. It tastes subtly like watermelon.

It promises to boost your strength and endurance, while it also claims to build muscle and burn more fat. It’s also made in the USA, and the manufacturing facility is GMP-certified.

Plenty of reviews have come out for Primal Surge, and for the most part they tend to mention the same good points and negative issues. A typical example is the Phoebus Apollo’s Oracle review, which offered a closer look at each of the ingredients.

It also noted that it definitely provided greater energy. The reviewer noticed that he was more alert, and that state of alertness was calm and controlled. There was no sudden surge of energy, and instead he felt a gradual increase of energy. There was also no energy crash.

Overall, he said that Primal Surge is a good product that has room for improvement. Its ingredients were well chosen and the supplement would be a good one to use regularly. He liked the taste of the watermelon too. However, he did say that some of the ingredients had too-low dosages.

The same observations were made by the Cause I Love Running website, which lists it as one of its top preworkout supplements for running. The reviewer also noted that the taste was watermelon sweet but very subtle, and it went down smoothly. She also noted that she felt the energy enhancement when she worked out, and she noticed some body definition within a few weeks.

On the other hand, she did have some trouble in mixing the powder properly so that it doesn’t end up as a clumpy mess. She also noted the low dosages, which made her use twice the number of scoops to get the results she got.

User comments and customer reviews tend to reflect the same basic opinions, though there are some exceptions. On Amazon(click to see product and reviews), it garnered an average rating of 4.5 stars, which is excellent considering that there are almost 200 reviews there.

Of course, it’s not a unanimous opinion.

Obviously it won’t affect everyone the same way. However, it is surprising that one customer noted some annoying side effects:

What’s really surprising about this is that this review that mentioned side effects still gave it a 5-star rating, because the customer support was topnotch.

This comes with lots of well-known ingredients such as Beta alanine and citrulline. It also has caffeine as well, and that’s with 250 mg. The dosage may be a bit low so you may want to increase the number of scoops, but you should start slow.

This contains natural ingredients, and it shouldn’t really cause any serious side effects. However, some may exhibit side effects if they’re allergic to one of the ingredients, or especially sensitive to caffeine.

There are 2 main websites where you can buy this. You can buy it from the main Primal Muscle Primal Surge website, where it costs $24.99 as a single sale. But if you’re getting it regularly every month, the price drops to $21.24.

It’s also available on Amazon(click to see product options on Amazon), where the price is surprisingly higher at $29.99. If you subscribe, then it goes down to $28.49.

Buying Primal Surge is a gamble, but it seems to be a safe bet. Side effects are possible but unlikely. However, it may not mix well. Also, if you have to increase the number of scoops then you’ll have to buy it more frequently.