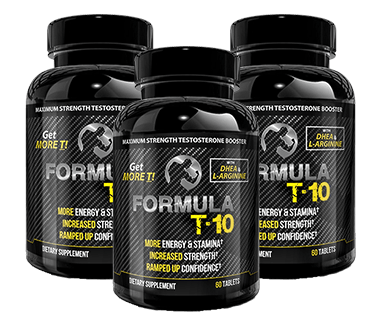 The Good:  A couple of decent ingredients and effects for libido and alertness.

Review:   Formula T10 is supposed to be a natural testosterone supplement/booster, to help your body increase its own testosterone production.  It uses more “natural” extracts like herbs, as opposed to testosterone “steroids”, injections and such – for improved libido, energy, fat loss and more.

It’s supposed to be sold online with a “free trial” offer – now here is where the fun starts!

You probably guessed – we don’t like this one. It was launched late 2013, and the net was saturated with thin crappy sites promoting the yellow and black bottled version of this. Pretty much all of those sites are now down.

As of June 2016, most of these crap sites seem to be promoting the latest re-incarnation of Formula T10, in a blue and white bottle. Some things don’t change though: we still have a problem actually finding or buying this supplement for real – and there are still dozens of sites redirecting you to “TesteroneXL”.

FYI:  this is what happens for certain unstable companies – they quickly change their sales policies or pull the product out completely – and resellers scramble to chuck in another product to fill the space.

There are a whole bunch of ingredients in this- though generally we did not feel a strong effect. That Formula T10 is a “proprietary formula” does not help either – many ingredients are only effective in the correct dosage- and we think Formula T-10 may have been cheap-skate here, despite the HIGH price of $89/ bottle.

How Does T10 Work? (Its Active Ingredients):

Most ingredients are okay for holistic health benefits, with some effects on energy and testosterone. Formula T-10 could have been decent in our opinion – but it is likely that they skimped on ingredients. And don’t let us get started on the sales issues…

Are there any Side Effects?

Most people experience no side effects with this product. The vast majority of reviews did not mention any …

Their problems were with the scams! We’ll go into that later – but it is unlikely that most of these herbs will give you any problems. If anything – the dosage is probably too low.

Back in 2013 – 2014, Formula T-10 featured a massive advertising blitz. They talked about a “secret formula” and how celebrities like Dwayne Johnson used this for massive results.

As of July 2016, most of these scam ads have been removed or gone out of business. Still, There may still be blogs floating around saying that if you combine Formula t10 and Prolexin IGF-1 that you’ll receive numerous benefits, so you should be on the alert. Other culprits/combinations include “Superior Velvet” and “Amino Prime”.

These other supplements (like Prolexin IGF-WTF) are usually marketed as bulking or male enhancement supplements. Most are useless – Prolexin and Superior velvet tout the “power” of velvet deer antler for example – which is actually very unproven as a supplement, or even completely useless.

So all these are celebrity hype for package deals that get you to spend even more – lure you in with a “free trial” sample – and then hit you with an auto re-billing plan in the fine print.

You won’t have to pay anything at all at first, except for the fee for shipping and handling. And then you’ll have 14 days to try out the supplement to see if it works for you. If you think that it does work, you’re then billed the full amount for the product, and that’s about $80 a bottle, depending on the seller. Some poor souls are billed several hundred because of bulk subscriptions.

And here’s what’s worse. They have been tons of complaints about a subscription program that sends you another monthly supply and an automatic bill every month. You’ll have to call up the company to cancel the service, and they can be very insistent that you stay on.

Like we said, Formula T10 seems to be mostly discontinued (phew).

Most sites redirect to “TesteroneXL” or “ Pure Muscle Gain”.  Frustrating and wierd. We suggest you don’t try these products either- here is a shot of the TesteroneXL terms and conditions, where they did not even bother to fill in details.

Frankly, many test boosters out there are just not very good, or are over hyped. T10’s formula is not the worst, but its sales and advertising are pretty horrible for buyers. Why not try something that has better value outright?

Extenze Plus Review and Results (2018 Update)