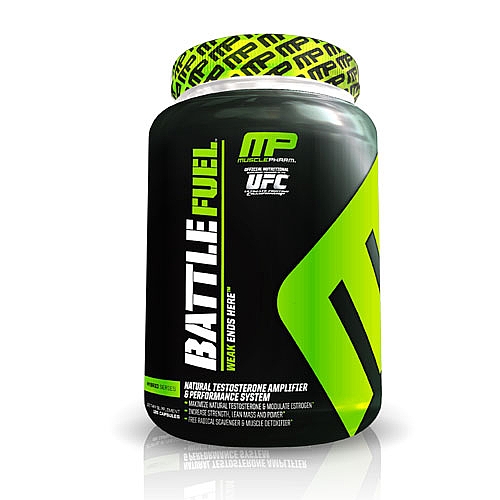 The Good: Inexpensive, some good ingredients and amounts.

Attention: BattleFuel seems to be discontinued in 2017. You can read on in case you come across product from old stock.

Any male over the age of 30 has to fight the fight of dwindling testosterone and a diminished sex drive. While some have it worse than others, the good news is that there are numerous supplements available that offer help and support without having to go the steroid route.

Battle Fuel XT is one the more reputable supplements you’ll come across (Musclepharm is facing financial problems but seems to be at least keeping afloat).

It takes a four stage approach to addressing the numerous needs in the male body, with all the ingredients working together to help facilitate a normal testosterone level in your body, leading to increased energy, strength, and the all-important libido. They even give you detailed instructions on cycling on and off, which is something you won’t encounter very often.

Unfortunately the 4 complexes make things too complex: as this is a jargon-full opportunity to NOT disclose what is in the mix. MusclePharm tends to do this with its flashy formulas as this creates mystique that they have found a “secret” formula – as well as making them legally less accountable for ingredients. Proprietary formulas mean that they can change the mix at any time!

Still, at least some of the ingredients dosages look decent, and some results do show through…

Mucuna Pruriens and Asteracantha Longifolia Aquatic Extract are also used. But note that after the DAA, there is only about 3000mg of ingredients divided between everything else!

Asteracantha looks promising as a testosterone supplement: it tends to regulate/reduce blood glucose, which regulates insulin, which in turn regulates or improves testosterone: however evidence for this herb (as well as dosages and concentration) is at the moment very sketchy.

Anacyclus pyrethrum is is another herb that seems promising for libido and testosterone issues, but is very under-studied; not reliable for now.

Suma is known for being a natural sterone/steroid; and we believe it is potentially very good. However, again, it is quite under-researched, and likely under-dosed in this case.

IC3 is actually an extract from cruciferous vegetables like broccoli – and is related to DIM but actually superior. So we don’t really know why they repeated this ingredient here. It is actually good for testosterone support: but again we are guessing dosages are concealed and likely slightly low.

We find Battlefuel XT to be strange for dosages and ingredients. Zinc is actually a great foundational ingredient for complete health and testosterone – the zinc dosage here is low and odd; we would prefer higher quality versions as zinc citrate and zinc gluconate, for absorption and safety.

Battlefuel seems to be deliberately too-innovative: most of the ingredients seem experimental. And usually concealed/proprietary dosages hide the fact that more valuable ingredients have low dosages, perhaps to save costs for the company!

We actually like most of the ingredients – just not the way they are combined. We would have liked to see more zinc, magnesium, boron, or mucuna as centre-pieces, and the other ingredients as occasional support.

Does BattleFuel have side effects or risks in taking?

Some people report that this formula gives stomach aches: it seems Battle Fuel can bring about a rough intro period that may result in you having to visit the bathroom much more frequently. We actually don’t think this is too common – or this could perhaps be an issue with the quality of DAA used.

Cheaper/Low quality DAA production can be known to be absorbed less easily, and give slight stomach aches. We personally did not feel a problem in this area.

We were a bit careless and left this in the sun for a few minutes. Our stuff now has a slightly eggy smell to it – often a sign of low quality cheap zinc used. But generally we don’t think this is a very big deal – BattleFuel is likely to be relatively low risk overall.

Battle Fuel XT is certainly worth a shot, considering its reputation, ingredients, and low-ish price (round $30 a bottle on Amazon). This formula is not the worst by far: but it is also not the strongest or the best. While it may not work for everyone, its not that bad – even if it’s somewhat weaker than what we like.