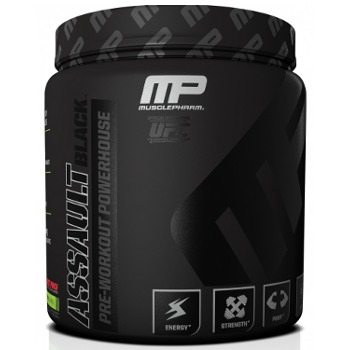 The Good: Some results, decent mix of ingredients.

The Bad: High dose of caffeine, too low dose of Citrulline Malate and others; slightly under dosed.

Want to have more energy and strength? Looking to improve your workouts and get the most out of your gym time? Pre workout supplements enhance mental focus, muscular strength, and stamina. They give you a competitive edge, without the side effects of anabolic steroids.

However, not all pre-workout formulas are created equal. Their quality and effectiveness depends on the ingredients used. Currently, MusclePharm Assault Black is one of the best selling supplements in its class. (click here to see buying options on Amazon)

This time, manufacturers have disclosed the ingredients and dosages used. The new Assault Black is weaker than other pre-workouts from MusclePharm and contains no nitrates. Another thing that grabbed our attention was the ElevATP, a unique ingredient.

Musclepharm Assault and Musclepharm Assault Black are a favorite choice for many athletes. Both supplements claim to increase energy and alertness, enhance sports performance, and speed up recovery. They also boast a nice mix of creatine, caffeine, amino acids, and other powerful ingredients that support energy metabolism.

The newest Assault was meant to be an improved version of the Assault Version 2. Assault is on to its 3rd version actually- as of late 2016.  However, the older Assault was more effective for increasing stamina. Assault V2 contained more caffeine plus nitric oxide boosters, which are missing in the new formula.

Opinions are mixed concerning the effectiveness of Assault Black. Some users claim that it’s slightly underdosed compared to the Musclepharm Assault. Others say that agmantine and other ingredients found in this product may pose serious health risks. ElevATP, the new compound used in Assault Black, lacks scientific evidence.

Our team has tested the new MusclePharm Assault Black and compared it to the Assault, one of the most popular pre-workout supplements from the same manufacturer. The most notable differences between the two are the addition of ElevATP and the dosages used for caffeine and other key ingredients.

MusclePharm Assault Black guarantees increased energy and strength, better pumps, and improved mental focus. This pre-workout formula will allow you to push the limits further and reach your peak potential. Compared to Assault, it contains more caffeine and comes with a higher price tag. If you’re sensitive to stimulants, you may not be able to handle so much caffeine.

This new energy-boosting formula provides 3 grams of citrulline malate. Upon ingestion, this amino acid is converted to l-arginine, increasing blood and oxygen flow to the working muscles. Basically, it gives you greater pumps, reduces fatigue, and accelerates recovery. Unfortunately, the dosage is too low to make a difference. The strongest pre-workout formulas on the market contain round 6 grams of citrulline malate.

Vs MP Assault: The addition of citrulline malate to Assault Black was a nice surprise. This ingredient is missing in the Assault pre-workout formula.

The Assault Black delivers 1.5 grams of creatine (Assault has 3 grams), which supports muscle growth and repair. This compound increases ATP levels in the body, leading to greater energy and endurance. During high-intensity training, it can be used for fuel instead of glycogen.

This supplement contains 3 grams of beta alanine, a non-essential amino acid that gives you that “tingle” during training. Studies indicate that beta alanine elevates muscle carnosine levels by up to 58 percent in just one month. This allows you to work out longer, recover faster, and ward off fatigue.

Vs MP Assault: Both supplements deliver the same amount of beta alanine.

This was the first time MusclePharm used ElevATP in its pre-workout formulas. As its name suggests, ElevATP is supposed to increase ATP production and boost overall strength and muscular endurance. This compound is derived from apple extract and ancient peat, which tends to lack scientific support.

The Assault Black boasts 300 milligrams of caffeine. At this dosage, your energy will go through the roof. Caffeine anhydrous has been shown to increase alertness, delay fatigue, and enhance power output.

Vs MP Assault: This pre-workout formula contains 50 milligrams more caffeine than the MusclePharm Assault, which only had 250 milligrams.

This may be too high for those who are not “stim junkies”- as it runs close to 3 cups of coffee. Some users may experience jitters, chills, and increased blood pressure because of the high caffeine content.

Both products contain bioperine, a natural compound that enhances the absorption of other ingredients. Made from black pepper extract, it’s 100 percent natural and has no side effects. Some studies indicate that bioperine may increase metabolism and thermogenesis, leading to fat loss.

Another new ingredient in the Assault Black is Chinese hawthorn, a plant that fights inflammation and promotes cardiovascular health. However, its benefits are not backed up by scientific research.

This natural compound improves the pumps you get during training, increases blood flow, and speeds up muscle repair. The nitrates in beet root extract are converted to nitric oxide.

Agmatine is a metabolite of l-arginine. Some users report skin tight like hardness and fantastic pumps from this compound, but the research is mixed. Studies have that agmantine can improve cognitive function and mood, increase appetite, and promote cardiovascular health. It also boosts nitric oxide levels by inhibiting the enzymes that break down this compound. The problem is that it may interact with l-arginine and l-citrulline, which are two of the main ingredients in the Assault Black.

This is probably minor but odd, but may cause problems with focus, or circulation in the long term.

This new formula also provides 200 milligrams of Huperzine A, an alkaloid derived from the Chinese Club Moss plant. Research suggests that Huperzine A may increase energy and alertness, boost cognitive function, and reduce muscular fatigue. It also strengthens the immune system and helps relieve stress.

The Assault Black has a more extensive list of ingredients compared to the Musclepharm Assault, but many are weak or ineffective. Some ingredients have little or no scientific support. Additionally, this new formula is about 10 percent fillers. Because of its high caffeine content, you can’t double scoop it.

What Flavors Are Available?

Users can choose from three different flavors: fruit punch, watermelon, and strawberry lime. The older version had four flavors. Serving size is smaller for the Assault Black (11.6g) than for its previous version (14.5g)

Where to Buy the MusclePharm Assault Black Label

The Musclepharm Assault Black can be found in most online stores offering sports supplements, such as Bodybuilding.com, Amazon, GNC. The price for 30 servings varies from $24.95 at a1supplements to $49.99 at GNC. Customers who live outside the U.S. can not order the product directly from Musclepharm because it doesn’t provide international shipping.

This all-in-one pre-workout formula looks pretty decent, but there are better products for that price. The new Assault Black may work for beginner lifters and casual gym goers, so it’s worth trying it out. However, it may not be the best choice for those who have been training for years, or used better quality pre-workout formulas in the past.