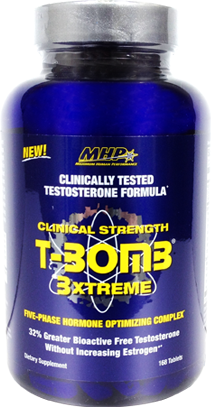 The Good:  Some useful ingredients to help modulate testosterone levels.

The Bad:  Not very effective, with concealed proprietary dosages (T Bomb 2 has even lower dosages of basically the same – not recommended). Lacks better testosterone ingredients.  May cause problems with hormonal balances if used long term.

Review:  Like many, you may be skeptical about how the supplement industry has become a multi-billion dollar industry. It seems like a lot of manufacturers are simply bent on making money, and offering placebos.

But the truth of the matter is that some of these supplements do work as they’re intended. The question is- is T Bomb one of them?

But we don’t think either Bomb lives up to the hype!

How Does MHP T Bomb Work?

When using anabolic steroids, stacking—or using combinations of steroids—is a fact of life. Some body builders do this in the belief that by combining the steroids, they become more effective than when they work alone.

Others stack steroids by combining a base steroid with a weaker steroid, and the weaker steroid can be adjusted to complement or to add to the effects of the stronger base. But honestly, natural test boosters are not likely to be as strong as synthetic steroids: despite the impression some companies give! It is better to see them as “optimizers”, rather than “steroid replacements”- they give you an edge but not a massive boost.

The T Bomb series intends to give all you need in a single package. Ideally, you just take 3 tablets twice each day. That’s it. With a bottle containing 168 tablets, you have a supply for 28 days, or exactly 4 weeks.

So let’s first take a look at what’s inside the T Bomb II (T Bomb 3, also known as 3XTreme, includes about 20% more of the same in a concealed formula):

Unfortunately, both T Bombs include most of their ingredients (and there’s a hefty list) in more than one proprietary blend, where they will not reveal the exact formula. So this means that the list sounds impressive, but is probably too weak.

Total dosages are only about 1.5 g per serving (where some of the clinically accurate dosages are several GRAMS for just one of the ingredients, like arginine), which at 2 servings per day will likely help you see some effects, but probably “could do better” for results.

There is a large amount of libido enhancing ingredients in T-Bomb. And this might produce boosts for sex drive rather than actually delivering testosterone.

Also:  MHP gives a lot of jargon about Aromatase Inhibitors and DHT blockers.  These supposedly prevent your body from converting testosterone into DHT or estrogen – hence increasing levels of free testosterone…

But in the long term you don’t want to block large unpredictable amounts of estrogen or DHT. This creates other unpleasant side effects.

Aromatase inhibitors and DHT blockers can be deliberately used as post cycle therapy and steroid replacements – but it helps if you are quite experienced (5+ years experience with lifting and steroid “cycling”).

It is very difficult for most to plan cycles and regimes based on T Bomb’s proprietary blends.

Generally we found T Bomb to have some effects, but not to be very strong, quick or well balanced. Some users report a strange aftertaste from taking this.

The T Bomb 3 Extreme basically has similar ingredients but with an increased dosage. Still likely under-dosed however.

The party line: “It was tested with Division II athletes training under harsh conditions that resulted in decreased testosterone and lower levels of lean body mass among those who took a placebo. But among the ones who received the 3 Xtreme, it was found that free testosterone increased by 32%.”

So is this a better alternative? We think T Bomb 3 is definitely better than T Bomb 2. In a pinch, you might want to try 3XTreme, and cycle off it fairly quickly, after 3-4 weeks of daily use to avoid side effects (note: this is not mentioned in the official instructions!)

But frankly, we would recommend other products altogether, as the best choice for effectiveness, safety, and affordability.

Honestly we’re guessing that MHP is well funded, and they may have paid for those over-spectacular results and endorsements. Most other experiments with those testosterone ingredients do not show such superb results. Seeing as T bomb is packed full of ingredients in proprietary blends, our main concern is the safety of the product – and its lack of  effectiveness.

If you are a veteran lifter, you might try this as a personal experiment. For most other users, we would strongly recommend something else: most good natural test boosters actually work in a similar way as testosterone is balanced with other hormones – you should just get the best product you can.