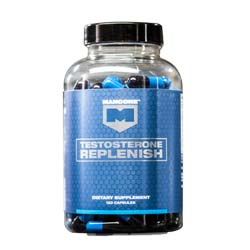 Mancore Testosterone Replenish Review- Will this really make you Young and Sexy?

In the health supplement industry, T-boosters are among the most popular categories. Countless different brands hawk their own testosterone boosters, and some of these supplements are available in a lot of websites. Some are sold in well-known online stores like Amazon, Vitamin Shoppe, and GNC.

Other brands however, are available exclusively only from a single source. That’s the case with the Mancore Testosterone Replenish, as you can only get it from completenutrition.com. But what does it mean when it’s no longer found on that site? Perhaps it’s just a technical glitch—but then it could also mean they’re really not selling it anymore.

What is the big deal about Mancore Testosterone Replenish, anyway? Well, it’s a testosterone booster, and it’s meant for the older guys who don’t naturally produce enough testosterone as they used to. While supposedly it can be bought on its own, it can also be bought as part of a Mancore package.

On its own, it’s meant to support free testosterone levels. That is, it is designed to make sure that your testosterone don’t break down and convert into DHT or estrogen. It also encourages your body to produce more testosterone. That’s to compensate for the sad fact that as a man grows older, each year sees his natural testosterone production levels drop a little at a time.

The problem with lower testosterone is that it lowers your energy level, so you’re not as able to work out more effectively. In addition, testosterone is needed for muscle growth itself. That’s why when men grow older and their T-levels goes down, they’re less able to retain their muscle mass. Mancore Testosterone Replenish is supposed to change all that.

The one advantage of selling a supplement in just one website—at least for the manufacturer—is that you’re able to control the customer reviews that appear on your seller’s page. The seller can just delete any negative reviews and keep the positive ones instead. They can even just write their own rave reviews. Of course, they can always just refuse to accept and publish any sort of customer review at all.

That’s what happened here with Mancore Testosterone Replenish and its seller’s page on the exclusive site. There aren’t any customer reviews. There are however, some reviews on supplement-focused websites we can check out.

The review on supplementcritic.com reminds us that “Complete Nutrition [the company behind the Mancore brand] has a reputation for good customer service, products, and appears to be trustworthy.”

Also, they note that “Mancore Testosterone Replenish has solid ingredients… I wouldn’t hesitate to recommend this to anyone looking to improve their sex life and well-being.”

The performanceinsiders.com review likes that “The complete Mancore Testosterone Replenish formula is revealed online” However, they do note that “Clinical studies to prove its claimed efficacy have not been conducted on this product.”

Basically, the conclusion in this review is that what you get here isn’t really any different from other testosterone boosters. It’s a middle of the pack T-booster.

It’s quite possible that this will work for you, and it all depends on the DHEA factor. Depending on how much DHEA it contains, it can really increase your testosterone levels. Lots of athletes have been banned because they’ve used supplements that contain DHEA, and that includes O.J. Mayo of the Milwaukee Bucks (NBA).

It does have Tribulus Terrestris too, and that’s also a well-known t-booster. All in all, with Mancore Testosterone Replenish you can actually replenish the testosterone you lose as you get older. You can then regain some of your pep and energy, and you don’t get tired as easily.

Such stamina can mean a lot for your workouts, and therefore you can really achieve your fitness goals. You may be able to lift more and build greater muscle mass or run more and lose more fat.

What caused the absence of the Mancore Testosterone Replenish from its completenutrition.com online shelf? After all, it’s not as if a lot of people have come out to say that it didn’t work? The problem, perhaps, is that it contains DHEA.

Now Mancore Testosterone Replenish isn’t the only over the counter supplement that contains DHEA. It’s just that nowadays it’s not good PR to include it in your ingredients list, since people can point out that it’s actually a banned substance according to the World Anti-Doping Agency. It’s actually a precursor to testosterone and is classified by WADA as a kind of anabolic steroid.

Yes, it does improve athletic endurance and stamina, which means you’re able to work out a lot longer without getting tired. But then it can also cause a long list of side effects which may not turn out so well.

There’s a very long list of side effects that you may get from the DHEA:

Of course, these may not be all that bad, because there may not be too much of the DHEA in Mancore Testosterone Replenish. But then if there isn’t a lot of DHEA in the supplement, it’s not all that likely to work either.

Just remember that DHEA can also increase estrogen too. So other side effects include man-boobs, tiny testicles, and a lower sperm count.

As of August 22, 2017, you could have bought Mancore Testosterone Replenish only from the completenutrition.com website. But now it’s no longer there. Using the search bar doesn’t show it either.

It used to be available for $49.99. This means the price is actually reasonable, since it has 120 capsules and you only need 2 a day. So that’s a 2-month supply.

There’s a reason why the WADA bans DHEA, and you really should reconsider buying this. But then again, it may no longer be available, so the question of whether you should buy Mancore Testosterone Replenish is now moot. Try something more reliable.