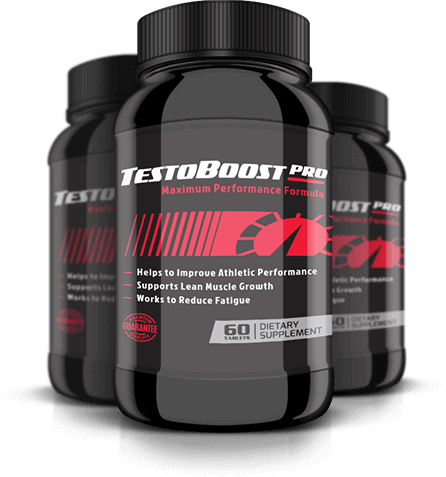 Overview: Male Testoboost Pro is somewhat shady, relying on outdated marketing, fake review sites, and promising the world — all from a supplement that is severely lacking in proven and accepted testosterone and libido supporters. However, there are some redeeming factors in play.

If you didn’t already know, the male body’s testosterone production starts to slow down when it reaches its 30’s. Before you know it, you’re waking up tired even after a full night’s rest, your sexual drive isn’t what it used to be, and your overall physical performance is slipping.

The solution may seem easy enough: you need to restore your testosterone to a normal level by taking something that will encourage or facilitate just that. If steroids aren’t your thing, your only other option is finding an effective natural supplement that contains proven ingredients.

Now, these ingredients are out there, but they key is finding a supplement that not only has the right balance of ingredients, but the right dosage as well. This is where it goes wrong for many supplements. Its also important to mention that just because an ingredient boosts sex drive, it doesn’t automatically mean it’ll boost testosterone.

Male Testoboost Pro decided that they’d rather put together a few well-done websites that feature ripped dudes holding chains, looking tough, and women who just seem to fall from the sky and right into your bed. Throw in a few graphic charts and lofty promises of “being a SUPREME alpha-male and getting ripped,” and, well, you’ve already won the image battle.

Their main site does feature some good information about how testosterone works. They discuss why steroids are risky, and how natural supplements are intended to “restore” your testosterone levels, rather than boost them through the roof to some superhuman level, causing you to conquer everything in your path and smash the world to bits with just your rock hard pecs.

They then top that off with an enticing deal of paying only for shipping when you order your “free” bottle, only to end up still being charged around $80 in the fine print after a few weeks. Not the most wholesome marketing you’ll come across.

But enough about that. Supplements are all about the ingredients, so let’s go over what they actually got right — and wrong.

Although most of the ingredients in Male Testoboost Pro are rather ineffective, there are some worth mentioning.

Besides their deceiving marketing and fake review sites, Testoboost Pro has some unproven ingredients as well. Wild yam root and sarsaparilla root have been studied with much scrutiny from the medical community, with non-existent or inconclusive results.

But the non-disclosure of ingredient amounts is the worst. Just because a supplement has an ingredient doesn’t mean it has an effective amount.

Dosage is fairly simple and easy; 1-2 pills before each workout. Hard to beat that.

Despite the long list of miscues, Testoboost Pro does have a few things going for it. Unfortunately, the lack of dosage amounts, and the confusing/deceiving payment policy really works against it. Although it may be worth checking out for yourself, there are plenty of other supplements out there that are much more upfront on all levels.