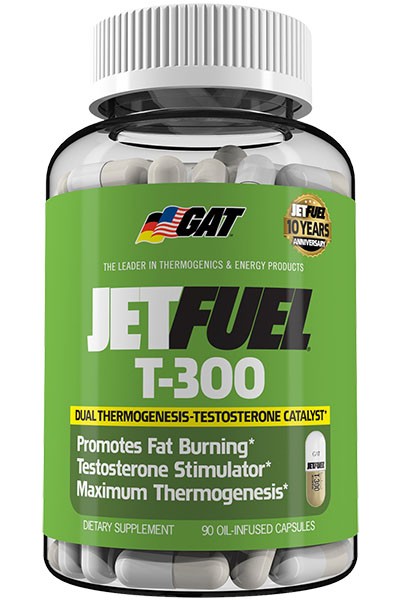 Jetfuel T-300 Review: Will this really make you Energized?

Jetfuel T-300 is an old name brand in the supplement industry, but now it comes with a brand new formula. It’s still tasked to do the same things as before—it’s supposed to help you lose excess fat while you also bolter your dropping testosterone levels. With this, you can start your journey in obtaining the lean yet muscular frame you’ve always wanted.

For several years now, the Jetfuel T-300 supplement has been among the most well-known brands in the industry. Their manufacturer GAT received a lot of kudos because many found that unlike other supplements, this actually helped boost the energy of their customers. Others also found it an effective supplement for fat burning and weight loss.

As it turned out, the Jetfuel T-300 was too effective, and that’s because it actually contained a lot of BMPEA. This seemingly innocuous set of initials actually represents a compound that’s dangerously similar to amphetamines. It can severely affect blood pressure, and when combined with a stimulant ingredient like caffeine then it could cause a stroke.

Jetfuel T-300 was actually the supplement with the highest concentration of BMPEA. It wasn’t the one that contained this ingredient, however. Eventually, the FDA stepped in and warned the various manufacturers to stop making their BMPEA-spiked supplements.

That leads us to this new formula. It’s actually a blend of 3 different formulas, plus vitamin B3 and minerals magnesium and zinc. The various formulas offer 3 different prongs of attack to really boost your physique:

The Jetfuel T-300 tends to be overwhelmingly positive, as they attest to the effectiveness of the supplement in proving a real boost of energy. The following customer reviews from bodybuilding.com is almost unanimous in attesting to how well this works.

Of course, there are those who didn’t get the benefits, but they’re actually not all that common.

Expert reviewers also tend to concur that this should work, but there are concerns as well. The supplementwatch.com review acknowledges that “all the ingredients are scientifically supported.” But the caffeine is a problem and they note that “The high caffeine dosage may be problematic for some users.”

This really does offer the energy you need to achieve your fitness goals. It gives you the energy to move, the cognitive enhancement to focus on tasks, and the fat-burning body setting that really helps to lead to a lean figure.

This Jetfuel T-300 supplement works for a lot of people, and a quick look at the ingredients explains why. You really do have lots of energy to burn, and so you’re more motivated to work out and that leads to fat burning too. You’re likely to pack muscle and lose fat, and GAT is to be commended on its new formula—at least in terms of effectiveness.

GAT learned its lesson and now they’re the model of transparency. They have 3 special blends, but they’re no longer “proprietary”. They come right out and list which ingredients are included, and they also list the precise dosage for each ingredient.

Of course, we do have to talk about the huge amount of caffeine here. There’s a lot, and some of the other ingredients (especially the Yohimbe) may be a shock to your system the first time you take Jetfuel T-300. That’s why you’re advised to just take 1 capsule in the morning of the 1st day, and another capsule before lunch. Then you can gradually increase the dosage in the next few days.

This contains Yohimbe, and it doesn’t really contain much (just 37.5 mg). The problem with this is that its main active ingredient is Yohimbine, and this is considered a prescription drug in North America. Here the Yohimbe contains just 8% yohimbine, so it’s really a minuscule amount. Nonetheless, it can cause stomach upset, anxiety, agitation, sleep problems, dizziness, and a racing heartbeat.

What’s more problematic is that each serving gives you 300 mg of caffeine right away. Since an average cup of coffee contains 95 mg of caffeine, this means that you’re getting 3 cups of coffee in the morning when you’re supposed to take this when you wake up. What’s more, the suggested dosage is 1 to 2 servings per day, so that’s potentially 600 mg of coffee—more than 6 cups a day.

You don’t need us to tell you what kind of problems and side effects that you can get with this much caffeine. You’ll probably get the jitters, heart palpations, and some GI issues too. You’ll also need to say goodbye to your cups of coffee, as well as to tea and soda.

While in 2015 it was pulled off the virtual shelves of various online retailers due to its BMPEA ingredient, this new formula is now back in the sellers’ good graces. It’s available in a lot of online stores, some options:

These prices still aren’t accounting for shipping fees, however.

This works, but then again it’s may also work a bit too dangerously again. It may not have an amphetamine-like ingredient, but then what do you call 6 cups of coffee a day? Be careful when you take this, because you may end up with the jitters and other side effects of too much caffeine. You could try something more reliable