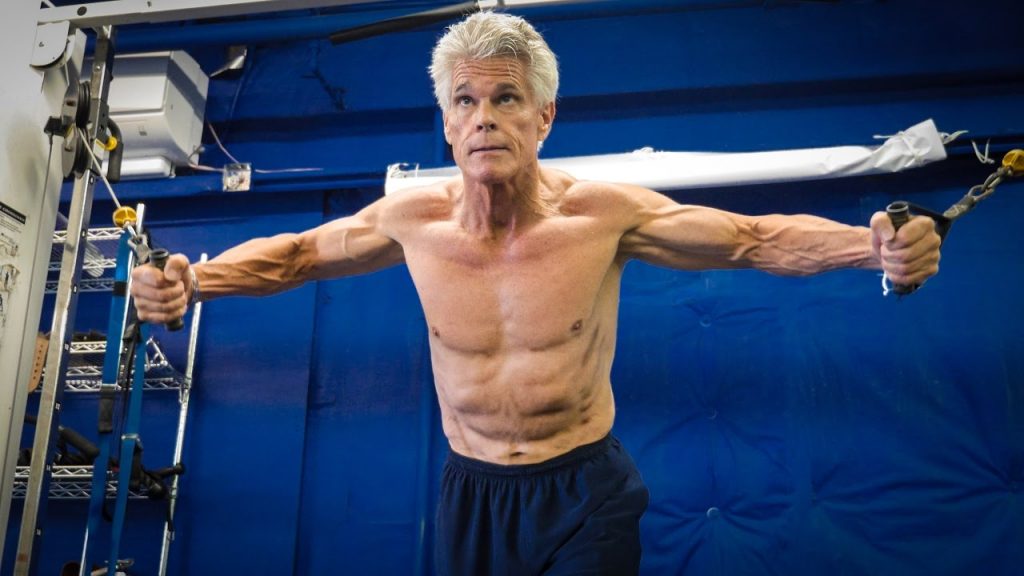 How to Get a Ripped Body after 40 – Fast

For lots of teens and young adults, 40 years old seems really old. It’s like your life goes downhill after hitting that particular milestone. Muscles disappear, and excess fat come in their place. It doesn’t seem like a fair trade, doesn’t it? But you can actually learn how to get a ripped body even after turning 40, and it can even be done quickly.

The Problem with Getting Old

If you think about it, it’s quite understandable why your body can get a bit soft and pudgy when you turn 40. At this age most men are partnered up or married, so there’s no longer the impetus to look good to find a romantic partner. Besides, the wife may even think the guy is cheating on here if he suddenly decides to get a ripped body at this age. Most guys are comfortable with a pudgy body because all their friends probably look that way too.

Also, for men there simply isn’t enough time to actually work out properly. At this age many people have more work responsibilities, and there isn’t much time left for going to the gym with their busy schedules. Even when they do have time to spare from work, they’re so tired that they’d rather spend their free time lounging on the couch watching sports.

But there are actually several good physical reasons why at this age maintaining a fit frame becomes more difficult. It’s that at this point of your life the aging process tends to accelerate. Your body doesn’t produce as much testosterone, so you’re not quite as energetic as before. It’s not all about testosterone either, since women can also generally find themselves getting bigger and heavier at this age.

Muscles can disappear, and it starts to slow down your metabolism. And even as you maintain your normal calorie intake, your body starts storing more fat. The stress may have taken a cumulative toll on your health, and years of junk food and beer can really mess you up in the long run.

The increase in fat storage is quite a problem, and that’s proven by so many people with large bellies these days. Even small men often have this fat problem. Men can be skinny fat, and they can have man boobs as well.

You Can Still Turn back the Clock

But you can fight off the rapid onset of aging with a good diet and workout plan. You can get a great body even after turning 40. In fact, you can get ripped after 50 as long as you know what you’re doing. You can get lean not bulky simply by taking a few crucial steps that may be against conventional wisdom.

For some, it’s even possible to slow down the aging process. For most people it’s like they age 1.5 years for every 1 year that passes by after 35 or 40. But if you play your cards right, you won’t look like a year has passed even after an actual year is done.

You can start by doing a few tweaks to your diet and workout regimen in the meantime. You may want to forget about faddish diets and the currently trendy workouts, and instead concentrate on really countering the aging process the right way.

“Fat” is a dirty word for some people when it comes to their diet, and in fact this hatred for fat has become popular over the decades. Now it’s pretty common to see low fat versions as the supposedly “healthy” food and drinks you need to choose. You’re probably told to avoid cholesterol too.

Take a good long look at the fans of the low fat diet. Do they look healthy to you? More often than not, they’re weak and they’re also more apt to get sick. The constant worry about every single calorie and every gram of fat adds to their stress, and that’s not healthy either.

Ever since the jogging and running revolution of the 1970s, people have taken to jogging on the streets as a way to keep healthy. Today a large number of people are doing this in the gym with treadmills, which remain a topselling piece of workout equipment.

But the reality is that running for too long, as well as other forms of endurance training isn’t really good for countering the onset of aging. In fact, your aging process becomes faster when you run for hours at a time. This type of cardio workout produces lots of free radicals that use up your ever-diminishing supply of nutrients and tissues.

With the right program, you can still do cardio, but at least you can do it the right way. It won’t take up too much of your time either, as an hour in the gym every day can be too much. If you do it right, you may only need 15 minutes of cardio.

Stop Hanging Out with Aging Defeatists

One of the reasons why so many people past 40 are out of shape is because all their friends and colleagues are overweight too. If that’s the case with you, then perhaps you need to hang out with people like that. It’s not because they’re overweight that you should avoid them. It’s because they’ve accepted their fate—and you shouldn’t.

What you have to understand deep down is that growing a belly and losing your muscle definition isn’t always inevitable, especially when you’re willing to work at it. It’s understandable if you want to fit in with the company you keep, but perhaps you may want a hang out with a different kind of people. Find others like you who are filled with a positive outlook and who don’t mind facing down a challenge. Their presence can be very encouraging, and they can help you succeed in achieving your fitness goal.

Lots of people today aren’t as hydrated as they ought to be. People work at their desks for long hours and they forget to drink up at regular times. They may drink some type of liquid, but then they may even take drinks that actually end up dehydrating them even more. These include sodas, energy drinks, coffee, caffeinated tea, and even milk. When they’re relaxing, they drink alcohol and that’s a very well-known diuretic. You tend to urinate more frequently and your body gets dehydrated because it gets rid of too much liquid.

You need water, and not just for plain survival. Water suppresses food cravings, and it even helps burn fat. It’s also very good for your skin as it keeps you looking much younger. You can start by drinking 12 ounces of pure water a day and you need to keep that a habit.

If you never exercise, it invariably means that your muscle tissues will continue to disappear each year. But you can’t train for too long, especially with cardio. That’s bad for your muscles as well.

Instead, you need to workout for a shorter period of time. You need to include high intensity exercises, such as sprinting instead of jogging endlessly. You must also lift weight as this will directly help build muscles, and the presence of bigger muscles can boost your metabolism. About 4 different exercises per day should be fine, as long as they’re the right ones.

When you want to build muscle, you’ll need a boost beyond just plain diet and exercise. You will need the right supplements for building muscle over 40. The wrong ones are the synthetic supplements that generally are part of the list of banned PEDs. These are very difficult to use without ending up with some horrible side effects.

Instead, you need to go for natural testosterone boosters for muscle and weight loss. These tend to have extracts that are designed to enable your body to produce testosterone naturally.

Picking the right supplements can be tricky, as there are so many hyped up products online. You need to do your research, though you can always benefit from extra zinc, magnesium, vitamin D, and boron. You should also get testosterone boosters that contain DAA and Mucuna Pruriens.

So you can get a nicely muscled body even when you’ve gone past 40. You just need the determination and knowledge to eat and exercise properly. Add the right supplements, and you won’t feel old before your time!

Does Low Testosterone Make You FAT? – what Men and Women should know