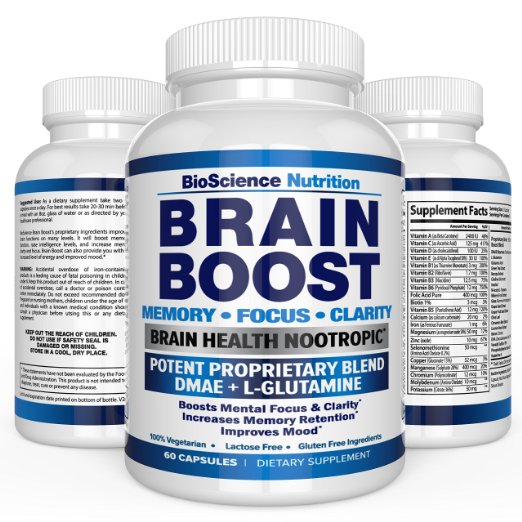 Brainboost Buying Guide- No Caffeine, But Does This Really Work?

Let’s not bother listing down all the 41 ingredients of Brainboost. That’s just too many. It does seem like a throwing stuff on a wall and seeing which sticks. But will they stick for you? Will it really give you a brain boost if you take Brainboost? According the more than a thousand reviews online, it may—or then again it may not.

It seems at first that taking anything to make you smarter is a singularly foolish thing to do, isn’t it? It’s like someone’s playing a trick on you. Then at some point you remember that caffeine is such a substance. It wakes people up and helps them concentrate, and lots of people seem like zombies without it in the morning.

But that’s the rub of Brainboost. There’s no caffeine in it at all. You won’t get the side effects that are commonly associated with too much caffeine. You don’t get the jitters, and you don’t develop a tolerance that causes you to need more of the supplement to get the same effect you’ve always enjoy. You also don’t get withdrawal symptoms when you stop taking the supplement.

Yet it’s marketed as a nootropic supplement, which is in other words a cognitive enhancer. It’s a brain booster, which explains its brand name.

It’s true that it contains a whole lot of ingredients. That’s probably for the best. The fact is that for many herbal supplements, they may or may not work. With so many ingredients, it’s a fair chance that some of it may work for the people who use it.

The main ingredient, however, is choline. From choline your body produces acetylcholine, which is the neurotransmitter that’s released by your nerve cells to send signals to other cells. It’s linked to better memory and cognitive function.

It’s also paired with DMAE (dimethylaminoethanol) so that it can get through the blood-brain barrier much more quickly.

Reviews – Do They Regret Buying This Stuff?

Despite the lack of caffeine, it seems to work. According to anecdotal reports, it seems to offer many types of cognitive benefits.

It helps with the memory:

“In a natural way, my husband has been able to recover and increase his memory capacity much more than he thought possible!” – Tracie, on Amazon.

“Best part is that I haven’t misplaced anything, also my memory is improving a lot.” – Edith Mendoza, on Amazon.

So if you’re concerned that your age may be giving you memory problems, it may help. The same thing goes if you’re a college student and you need to memorize a lot of facts.

It also helps with concentration, so you can focus on any given task.

“After 1 week of taking Brain Boost I noticed that I am very alert and I can focus more on any task” – Edith Mendoza, on Amazon.

Some offer kudos for the customer support:

“I have also had the opportunity to interact with customer service for Bioscience Nutrition. They are exceptional!” – Tracie, on Amazon.

However, some do say that it’s a tad expensive:

So it can help for many reasons. If you’re getting some memory problems as you get older or if you’re constantly misplacing your smartphone and keys, then this may help. It works great for those whose jobs require intense concentration, as well as for college students.

But what about high school students or even younger kids? Well, if you’re a parent should keep this from them. BioScience Nutrition explicitly warns that it’s not for children under the age of 18. Brainboost also contains iron, and it’s unfortunately not rare for children under the age of 6 to get an accidental overdose that leads to serious poisoning.

Some users, however, have had negative experiences:

“The worse ever, it keeps me sleep, feeling tired all day.” Mona E., on Amazon.

“Save your money. This did nothing for me.” – ObjectiveThoughts, on Amazon.

It is true that dietary choline can help improve cognitive performance, and this was indicated in a study published in the American Journal of Clinical Nutrition. In fact, it also showed that “choline intake at midlife may be neuroprotective”. In plainer words, it protects your brain from degenerating as you get older.

DMAE seems to offer similar benefits as well. Aside from the cognitive enhancement, it also helps elevate your mood. However, not everyone is convinced that it really does cross the blood brain barrier effectively. Some say that its capacity for that is “relatively weak” (Nootriment.com).

Where Can You Buy Brainboost? How’s the Pricing?

Brainboost sellers are easy to find online. It’s available on Amazon, where it’s the #1 bestseller—for Vitamin A supplements. As of early 2017, pricing is good if you buy in bulk, roughly less than $20 for 5 bottles.

You can also get it on nootrilab.com and on cambridgelsat.com (which seems to be a site dedicated to law students). Malaysian buyers can get it on 11street.my for RM 145.

Sure Brainboost works for some. But a significant number of people say otherwise, and insomnia problems are prevalent. With the complaints about the price, it does seem like you’re gambling a lot of money for a rather uncertain result. Even if it does work, you may find more cost-effective alternatives.

Neuro Clarity Buying Guide- Are Results Worth The Higher Price?