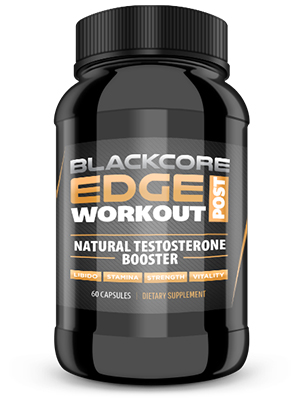 As modern consumers these days, many of us tend to do the right thing and do some online research for anything we buy  –figuring out what’s really good. But that’s not so easy when you’re trying to buy Blackcore Edge, which makes you wonder whether you ought to buy it in the first place.

What is Blackcore Edge?

Blackcore Edge is a dietary supplement. It contains several well-known ingredients that are popularly known as natural T-boosters. Instead of adding synthetic testosterone to your body (which causes lots of serious side effects), Black Edge encourages and stimulates your body’s ability to produce testosterone naturally. This prevents any side effects.

The problem is that it’s not really easy finding the right ingredient list for Black Edge. It isn’t sold on Amazon. There are several reviews online, and they seem to quote (or focus on) different ingredients.

We don’t even know if it’s being marketed purely as a testosterone booster or as something else. Some product images show on the bottle that it’s a “pre-workout” supplement while others say that it’s a “post-workout supplement”. You may even read fake blog posts claiming that it enhances your sexual performance, while other websites even claim that it makes you bigger “down there”. Sure, as if many will believe all these claims.

Reviews – Do They Regret Buying This Stuff?

Another review on supplementcritique.com notes that there are other websites with other ingredients list, which must truly be confusing.

The usadrugguide.com website is the most positive, as it seems to believe everything stated on the advertisements. It says outright that it boosts testosterone levels, it balances hormonal levels, it helps you to become “strong sexually” (whatever that may mean), it increases energy levels, it helps make your workouts more effective, and astonishingly it’s even supposed to burn off stubborn fat. It’s like the Holy Grail of supplements for men.

All the negative reviews mention the scammy sales tactics, however. You can only buy it through the free trial, but then canceling your 14-day trial becomes an exercise in futility. You’re then automatically enrolled in a buying program that bills you a hefty sum every month.

Ironically, you find lots of complaints about this sales tactic in the brownnosing review on usadrugguide.com.

“I got hooked on their free trial which ended up costing me over $90. I found no effects on my workouts and doubt that it is as claimed. I feel that it is a scam as I don’t remember agreeing to an extra $89.95 being billed on my credit card if I did not cancel within 14 days.” – Gary.

“A total scam, they call it a free sample, then charge you $98 per bottle, a total rip-off, and they don’t give refunds.” – Paul Farrell.

“I agree this is a scam. I thought I was purchasing a trial. Ended up billing me twice for two different items, $94.90 and $94.98 for an auto shipment I had no idea I was receiving.”– Tim.

These are all fairly recent customer complaints as well, as they appeared on the site on February and March of 2017.

Then there are the fake news article purporting to be affiliated with Fox News or with Men’s Health. A TMZ report even revealed that former Hugh Hefner girlfriend sued Blackcore Edge when she found an online article saying she did an interview with Dr. Oz and she described how Hugh Hefner took Blackcore Edge to cure his erectile dysfunction.

Basically, there are no good results to report. It seems that no one is really taking this and getting good results, because the most common reaction seems to be complaints regarding the auto shipments.

How can you do research when you’re not even sure what the ingredients are?  Heck, it’s just common sense. When you find that such a manufacturer is being sued for false and deceptive advertising, you know that something’s wrong. That’s enough evidence to stay away from this.

How Can You Buy Blackcore Edge?

Before, you paid $4.95 per bottle for shipping and then you get your free trial package. You’re given 14 days to cancel the subscription, or else you’re automatically charged with the full price. However, there have been numerous complaints about being charged right away and it can be a problem canceling the free trial.

Right now, there doesn’t seem to be any official site at all. That’s obviously a problem, as it doesn’t help you think that the company is legit at all. The posted numbers are available on ragednatrial.com (877-516-7511), and you also need to call the number to cancel the trial. Good luck with that, though.

In case it’s not yet obvious at this point, here our recommendation: forget about it. You have better options.